Once arrived in Avignon off the TGV, we had no idea how to reach the main town where we were staying. It was going to be a 50-minute walk, so in our exuberance, we decided to take our first ever Uber ride. Turns out Avignon doesn’t do Uber – so an Uber-x driver picked us up and took us into town for €13, which seemed a good deal … until we discovered that the local train would take us from the TGV to the town station for a grand total of €2.40!

We had booked our hotel while on the train as, until our train started moving, we didn’t know if we’d be in Avignon that night. It was supposed to be a cheap but good hotel with high ratings, but the reality did not meet the expectation. It was old and tired, with a tiny bathroom, but the bed was comfortable, and the location was close to the centre of the old town. 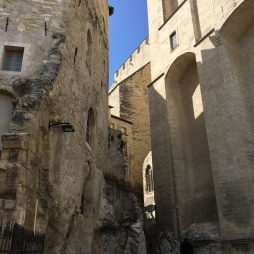 We had time to wander and explore old Avignon; the Pope’s Palace dominated the town and our entry fee included a tablet and headphones which gave interesting background information and an interactive guide around the different rooms of the palace (in English). From the top terrace, we got a great view of the old town and countryside.

Of course, being in Avignon, you must go…”sur le Pont d’Avignon” so we found our way to the bridge that has a lot of history and is still only half a bridge.

The next morning, wiser now, we caught the local train back to the TGV station, where we picked up our rental car and headed off to explore the roads of Provence and into the Luberon regional park. We needed to turn a 67km road trip into a 6-hour journey, as we were unable to check into our accommodation in Apt until 5pm. Setting our iPhone maps to take the back roads, we stopped first of all in L’Isle Sur la Sorgue, a pretty little town with canals running through it and water wheels and weirs controlling the direction and force of the river. We grabbed a simple lunch here and then wandered onwards to the next small town. 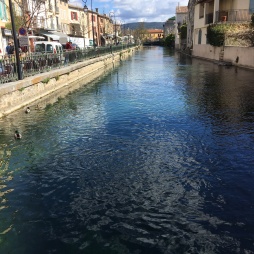 Gordes was our next destination. We drove through rural roads, avoiding the highways to this quaint wee town at the top of a hill. We wandered the narrow streets and took in the amazing views, and when leaving the town stopped to catch a glimpse of the town across the valley where it amazed us more how those in years past constructed these towns on steep hills without the technology we have today. 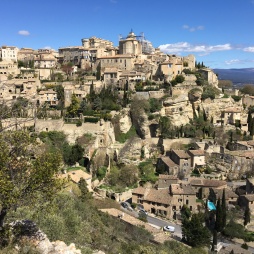 Onwards to Roussillon, where ochre coloured the land. We stopped again for a break and marvelled at the history of this place which became a hub for extraction of ochre.

Finally to Apt, where we stayed in a lovely B&B Hotel, Le Couvent – a restored Convent with spacious rooms and grounds. We picked Apt for a two night stay as it seemed to be a good halfway point on our journey, and it turned out to be an excellent choice. From here, we were able to cycle the rail trail east and west, hiring bikes and heading out the next day.

View out our room window 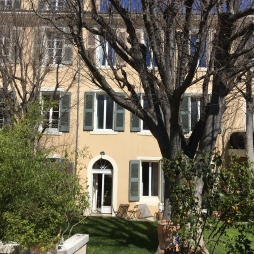 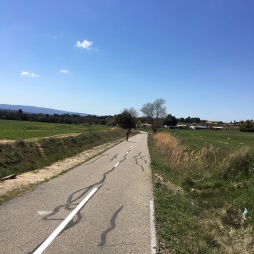 We cycled towards Cavaillon, happy to be off the roadways and seeing fields and rural lands as we headed east. There were a number of people using the cycleway, but as it was a weekday it wasn’t crowded. A couple of times we missed the turnoff and had to backtrack, but generally, the route was easy to follow. We cycled around 50km, and by the end of it, my seat muslces were certainly complaining about the awful unpadded seat of the bike. It took a couple of days to feel completely over it! Chris took his bike out for another ride the next day before we had to set off on our way, but all I managed was to get the bike back to the rental shop. 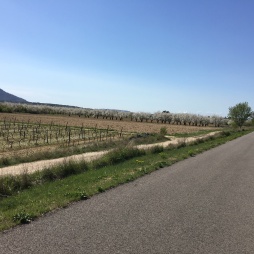 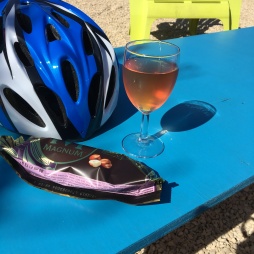 During our two nights in Apt, we had one good meal and one to forget. Tasting regional fare is always something we try to do and we ended up at a restaurant on our last night boasting a Savoie menu as well as pizza. Previously we have seen tartiflette on menus, and I had some idea it was like a type of gratin. I considered it but instead chose a veal dish, thinking it to be like a schnitzel with a cheese sauce – it was more like bits of meat and mushrooms in a very cheesy sauce with more cheese on top and hubby thought he was getting a fancy tartiflette, but instead ordered what came out like a mini fondue – cheese in a pot with thinly sliced dried ham, hot potatoes and salad. We persevered but gave up with the cheese overload. The comment of the evening was that the chips (fries) that came with my dish were the best thing on the table… oh dear! Should have ordered pizza.

Once again we packed our things into the car and set off for our house sit in Opio, in Provence Alpes Cotes d’Azur. Again, we set our maps to take the back roads through the Verdon, and back roads they were indeed! Winding narrow tree-lined avenues with barely room for one car… we trundled along, enjoying vistas of lakes and mountains and glimpses of lavender fields that would be in bloom in a couple of months, up and down hills and generally enjoying the drive, except for trying to find lunch.

Avenues of trees and wide roads??

Views to the snow

The small towns and villages we passed through had little in the way of anything to offer us, who really only need a light lunch. We did stop in one town that Google said had a recommended eatery, but the cafe was busy with people quaffing their wine and beer and no sign of any menu or food. We made do with a coffee and munched on the fruit and nuts we had brought with us, passing little town after little town that had no cafes or nothing open, as the day grew later and later until finally perchancing on a cafe that was open after 2pm. There were a number of motorbikers sitting outside and others inside so we grabbed a sandwich (filled baguette) each that eased the hunger pangs at last.

As we drove we saw snow on the “pre-Alpes” and climbed higher and higher, but thankfully not to the snow. At last a glimpse of the Mediterranean in the distance and the hope that we would reach our destination by 4pm. We wound our way down switchbacks towards Grasse and finally to meet our hosts and canine buddies in Opio. It was nice to be met by welcoming faces and excited dogs and to think we could unpack and relax here for the next 3 weeks.

Follow Kiwis on Adventure on WordPress.com
Join 160 other followers

Sunrise views from the breakfast table 😍
Beautiful (but windy) evening watching the sun set from the blowhole deck. Another lovely day in paradise. 🤩🏝

Join 160 other followers
Loving the Fifty Something