We were welcomed to our first European sit by homeowners Bev and Andy, and their delightful boys Deefer and Rocky. Deefer is an old brindle Boxer, very gentle and very calm, probably due to his deafness. He moves with grace like a small horse compared to the waddle of Rocky the Beagle, who apparently is half the size he was when rescued – still chubby and definitely a food fiend. Rocky definitely lets us know when it’s dinner time with what starts as a sort of whiny chatter and develops into a howl as Beagles do so well. He gets so excited when dinner is being prepared, spinning in circles and once it’s in front of him, it’s gobbled down with gusto. He is fed in a separate room from Deefer, as the old man is slow to eat, and sometimes doesn’t finish. I can imagine Rocky getting his face into Deefer’s bowl to finish off if he could!

On the evening of our arrival, we were taken to the local village, wandering over the hill, to the Irish pub where a number of ex-pats meet for beer, British football on TV and general camaraderie. Chris was introduced to a friend of our hosts with whom he would later go out on a couple of cycle rides. Then to a restaurant for a very nice dinner. We are still getting used to the French way of eating – late and lots! Most restaurants offer a deal of the day that covers 3 courses for a very reasonable price and of course, the wine is cheap. A bottle of reasonable wine costs between €12-20 or more depending on the restaurant. Generally, a glass of wine is €3-5. We had a good evening getting to know our hosts a bit better and by the time we wandered back home again in the dark, we felt comfortable that it would be a good stay.

The next morning, Chris got set up on one of our host’s road bike and went out for his first ride with the group he had been introduced to the night before. Opio is not far from Grasse, and basically, anywhere you ride from here inland is up hills! Suits Chris as he is a hill rider, but he learned quickly that this cycling group was more social than competitive. (Shout out to Chris’ NZ cycle buddies; you would be seen as far too competitive here) They rode up and around the local area so he got a bit of a feel for the steepness of the roads and where he could ride over the next few weeks. Once Chris returned and freshened up, almost 3 hours later, we piled into the back of Bev’s Mini and headed for the hills towards Gréolières, a steep climb up narrow winding roads for 23 km. The road was a little scary with the tight blind corners, to say the least, but amazing views of sheer rock faces and waterfalls and then the hills above us once we stopped were worth the ride. Bev and Andy ski near here in winter and had previously lived in a small town across the valley, which was our next stop. We drove past their old home in Cipieres and then back to Opio along a road that was even narrower and more hair-raising, past Gourdon and down to home again. Chris has since cycled this route and it is definitely a popular route for cyclists – we’ve seen them riding all times of every day around here. 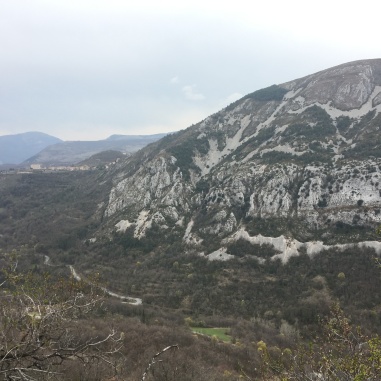 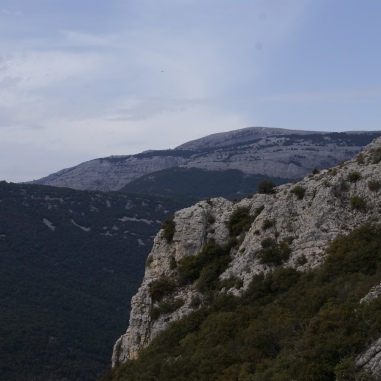 There is a road there… That evening Andy headed to London and Bev followed the next day, having shown us the ropes and given us instructions to get out and explore as well. It was nice to be given permission to explore and, in fact, Bev told us when we first interviewed with her that she likes to take sitters from far away to give them an experience of the Cotes d’Azur. As she told us, she was generally at work during the day, so her boys were used to being left alone. Despite this, we ensured that every day we spent time with them on a morning, walking them, reporting to Bev with photos, and generally tried to be home early afternoon if we went out but some days we hung around the house and just enjoyed relaxing in a home base.

The first week we were here, the weather deteriorated and we experienced very wet and very cold weather. Temperatures dipped to 8 degrees for a couple of days, and when the rain cleared, there was significant snow on the hills behind us. We were very glad to have plenty of warm clothes and wet weather gear when taking the dogs out each morning. It made for a messy return to the house, with towels being at the ready to wipe muddy and wet feet and bodies. These were good days to stay home, put the fire on and try to keep warm and dry. We did venture out a few times just to get away from the house and experience the local area; neither St Paul de Vence nor Cannes on a wet day are the best way to see these places and we did return trips to both in the dry and sunshine later on. Once the weather fined up and the sun started to warm things a little, we ventured around the coast towards Frejus. Our first stop was La Napoule, where we wandered through the gardens of Chateau de La Napoule, restored in the early 1900’s. We got lovely views of the coast and the Alps beyond as we climbed to a lookout at Theole Sur Mer, and even glimpsed the fantastical home of Pierre Cardin on the hill behind us. (Go on, click on that link, it’s a fantastical house!)

We drove onwards around the coast enjoying views of the Mediterranean and marvelling at the redness of the rock in the landscape. Stopping on the promenade at St Raphael to try and find coffee (café crème) was a dismal failure – we did get coffee, but not as we like it. (We have yet to find a decent coffee since leaving Paris and have pretty much given up and just rely on coffee maker here at our home base. It’s a much cheaper option for sure – we have been charged from €1.20 in Italy to €5 in Valbonne for pretty awful coffee.) Time to head back to home base, but I didn’t change the map settings to allow us to take the motorway (with tolls) and so our trip home was probably more tortuous than necessary and much longer! 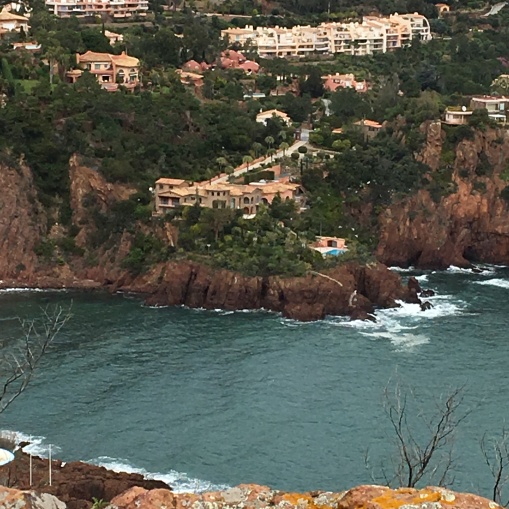 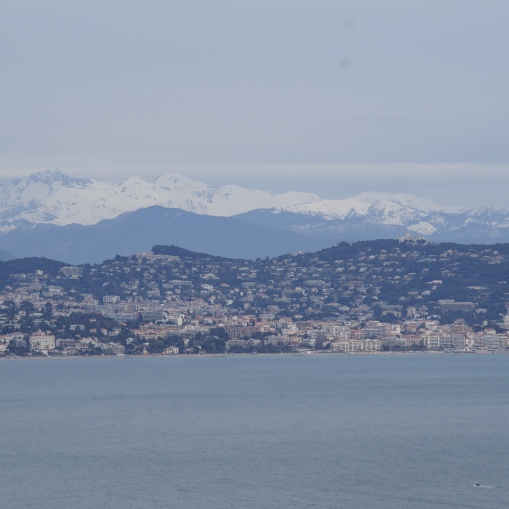 the old and the new

We had been told by our hosts of a marvellous cycle trail across the Italian border and urged to do it. We put the borrowed road bike in the back of our car and headed east. The French and Italians know how to build roads – tunnel, bridge, tunnel… not much climbing of hills and definitely worth the tolls charged, but then to get down to the coast in Bordighera (just across the border) meant steep and windy switchbacks, but then we were driving along the coast road. We found the cycle rental place and car parking right beside (the joys of weekday visits) and Carolyn hired an e-bike, so she could keep up with Chris. This bike, joy of joys, had a large comfort seat! We set off on the rail trail, wide and flat and away from traffic; being a rail trail, we went through a number of tunnels, the first being over a kilometre long, well-lit and wide, but a chill breeze blowing through. We were glad we had brought long sleeved riding gear as the air here was much cooler than it had been in France. I was definitely glad to have the e-bike as we whizzed along at 26km/h; I kept up with Chris mostly, but from time to time I needed to remind him I was back here! The trail along the coast was excellent, great views out along the Italian “Flower Riviera” where large glass houses cascaded down the terraced hills. Before we knew it, we had reached the end of the trail, where our hosts had recommended a nice restaurant for lunch. Italy was so much cheaper than France and we paid a total of €30 for two very nice mains and a 1/2L of wine. Fortified thus, we made our return trip back to the car and then back to our canine charges.

We are enjoying living in a home for a decent period of time. Cooking and cleaning and all the mundane trappings of life make it feel a little normal, despite the fact we are thousands of miles from home. Having two characterful charges to keep us company gives us a sense of purpose to our days. We enjoy these boys, they are easy to look after and it’s nice to see such a welcome home when we approach the gate too. They have very interesting quirks of character and it has been a very easy introduction to our house and pet-sitting experience here in Europe. I know it will be hard to say goodbye to these two when the time comes, but we look forward to new adventure and new friendships. 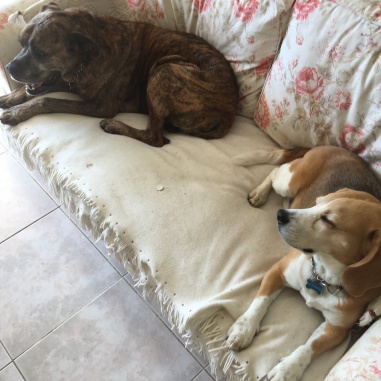