By now it was mid-June and as we headed back towards the coast, we noticed the heat increasing and were thankful to retreat to the cool of an air-conditioned car for the 4-hour drive to our B&B just out of Jaen.

The drive took us on motorways and on backroads, again different landscapes unfolding as we headed east. We were absolutely blown away by the vastness of the olive groves, there were trees growing everywhere you could see, and I read that the province of Jaen has over 60 million olive trees.

Ms Google generally did well for us today but failed miserably at the final hurdle. On our final approach towards Martos, we ended up driving up and up and up, the road getting narrower and winding until we had a lovely view back over the plains we had been driving and then down, down, down the other side, the road narrowing again – still sealed but almost like a private driveway. We wound our way down, but mild panic set in as the internet faded completely and the map died as we somehow left the prescribed route and it wouldn’t recalculate. Luckily, I had paid a little attention to where we were supposed to be; we made it back onto a wider road at the bottom of the hill and, with relief, found our way to the B&B to be greeted by our hosts for the next couple of nights. Sharon and Chris were South African via Jersey, before settling in this amazing rural location in Spain.

Dinner with a peek at the intense football game 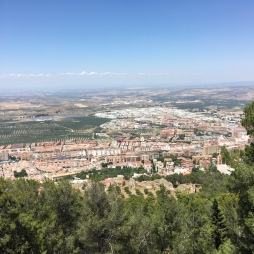 relaxing at our B&B

That night we ventured into the small town of Martos for dinner, seating ourselves amongst the Spanish football supporters watching the numerous screens set up in and out of the restaurants for the first Spanish match of the World Cup. Luckily it was not a loss for Spain, a draw with Portugal was acceptable. 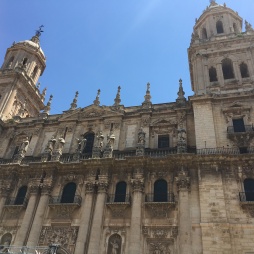 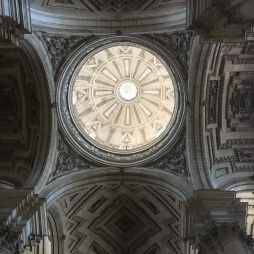 Chris enjoyed riding these back roads for the peace and varied terrain and the next morning he set off early, to avoid the day’s heat (high 30’s) promised, towards Jaen where I was to meet him with the car. Jaen was a larger market town with several historic buildings and, on the Saturday we were there, the town was buzzing in preparation for some sort of event at the cathedral. We managed to get into the cathedral to look at it before it closed for the afternoon. From the ground, it seemed large but not amazing, but as we drove up to view the town later, we realised the hugeness of it. We wandered through the Arab baths and the adjacent museum. The heat was fairly intense, so we didn’t spend too much of the afternoon wandering around and scuttled back to the refreshing pool at our B&B for the later afternoon, and a lovely meal provided by our hosts in the shaded courtyard, overlooking the olive groves beyond.

Views of the valley near Jaen

Once again we headed east, this time to the town of Guadix, where we were to experience staying in a cave house, common to this area of Spain. Arriving for check-in our host Maria had no English at all (and our Spanish is non-existent) so the tour of our cave for the night was done with much Spanish and sign-language and many nods. The day was scorching hot, but upon entering the cave house, we immediately noticed the temperature difference, and as we moved more into the interior the cooler it became. Apart from the lack of windows in the bedrooms, you wouldn’t necessarily realise it was a cave. We were thankful for a reprieve from the heat of the afternoon but ventured to the viewing spots of the cave houses nearby, and into town to try and see some of the landmarks, but beat a hasty retreat back to our cool cave as the heat oppressed us more. At least sleep was easy to come by in the cool of the bedroom that night, before the final push through to the coast next day for our next housesit.

inside the cave house

No filter needed. What a beautiful evening 😍
Great day out and about around Napier and Bayview on our bikes. And delicious lunch at Mission estate too. Continue the holiday break with sunshine today.