Our destination was Arcos de la Frontera, a small authentic town near Jerez where we were to care for 3 cats – two recently acquired kittens and an older cat, as well as the house. On our way here we stopped off to explore parts of Seville, walking the town between the Metropol Parasol (aka Mushrooms of Seville) and the cathedral. We enjoyed the small narrow streets filled with shops and tourists as well as the day to day activities of the locals. 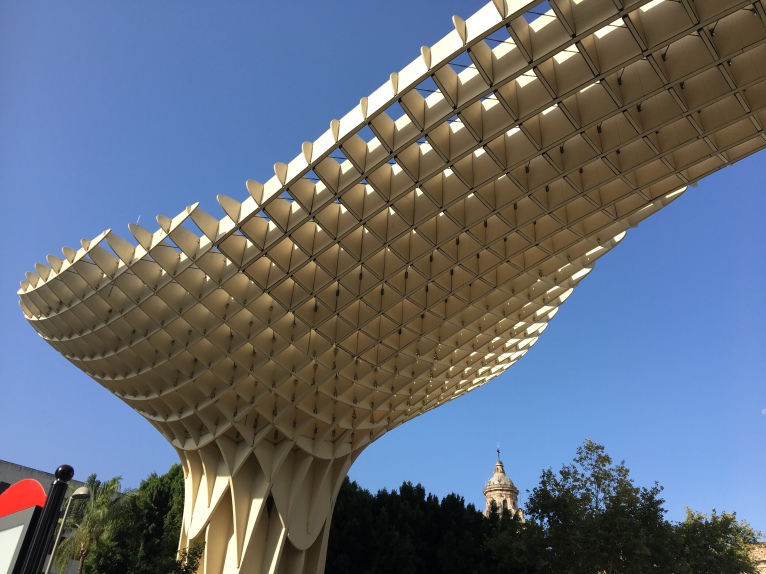 Arcos itself was a delight, set on a hill amongst the plains and river valley. Wandering the streets, we were surprised to find other English-speaking tourists as well; it definitely wasn’t on any must-see tourist lists I had seen previously. We loved the morning and evening views from our temporary home over that week and the authentic feel of this place. We were based less than an hour from Ronda so one day we set out, first to visit the nearby Cueva de Pileta and then Ronda itself. The local roads were great with small villages and huge rocky outcrops that caught the eye as we drove.  The caves were an interesting stop, we had to pre-book a time to arrive as they were quite remote and eventually our group of 12-15 entered the huge cavern discovered early in the 1900’s. Unfortunately, photos were not allowed, but the formations inside the cave were amazing and the prehistoric rock drawings were well preserved and quite clear. (Click here to see more) 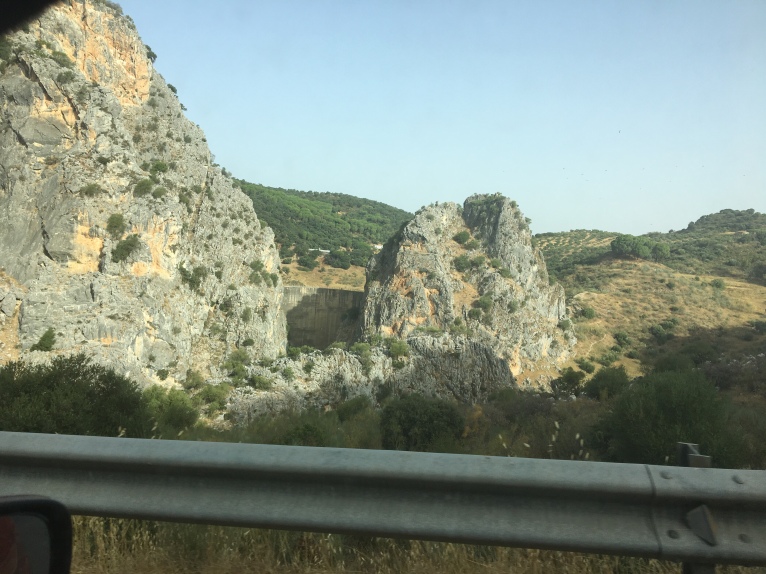 Ronda was full of activity, being a Sunday didn’t help, but we found a carpark and joined the throngs wandering the streets and gasping at the cliffside constructions that have survived many hundreds of years.

The town of Ronda 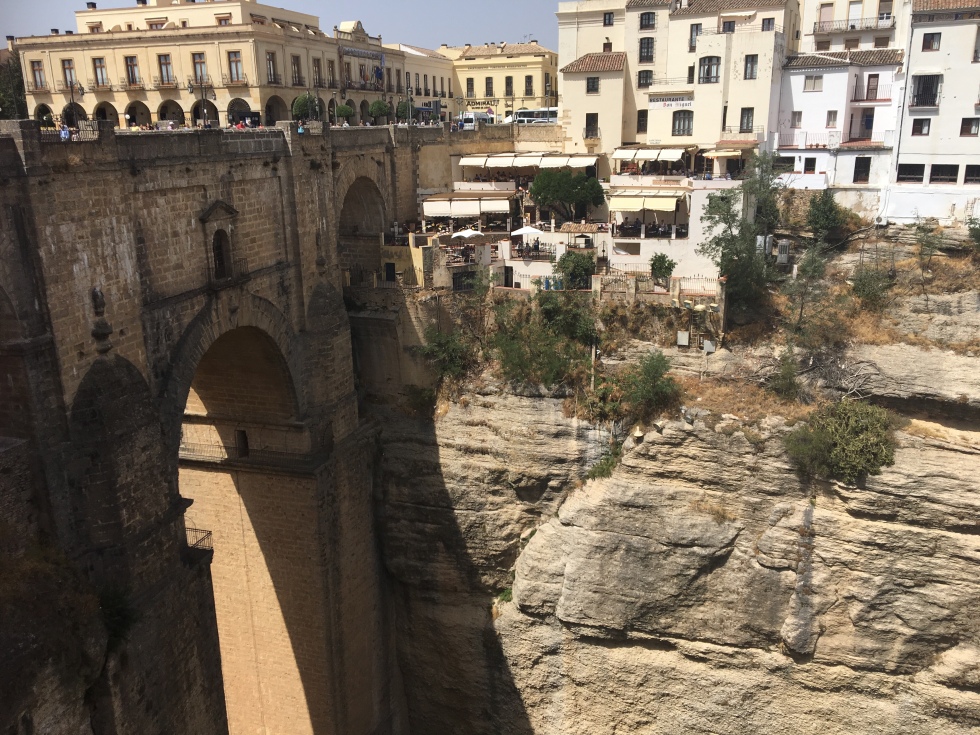 Another day, we headed to Jerez to explore and experience a sherry bodega tour. Tio Pepe is based in the centre of the town and provided a very good tour and tasting. It was similar but different to the port experience – sherry and port both being fortified wines. Tastings of different types of sherry gave us a bit of an insight that it is more than the stuff we pour over our trifle sponges. We learnt that to be called “Sherry” it must be produced in the Jerez geographical region (in the same way that Champagne must be grown in the Champagne geographical region of France). Tastings at the end included some small tapas (for an additional cost of course) but helped hold the lunch pangs at bay a while longer. We got talking to a couple from the USA at our shared table who were also travelling through Spain for an extended visit, and it was interesting to hear about their experiences and places they had been as well. As always, exit via the gift shop caused some delays as I had to get a couple of smaller samples to take away for later consumption.

Too soon, it was time to prepare to move on again – having secured a short weekend housesit in Gibraltar that immediately followed this one, we headed south to the Mediterranean coast for the night only to hear that our future host was quite ill and would not be going away for the weekend causing us to hurriedly rethink our plans. As we were heading to Madrid for a flight later that week, we decided to head back towards Ronda for a couple of nights so we could explore more of this interesting area.

I had seen photos of Setenil de la Bodegas and was disappointed we had missed it previously, so this was our first stop. To see the houses built into the overhanging rock of the riverbanks was mind-blowing. The rock dominated the streetscape but provided shelter for the inhabitants. Both sides of the river had these amazing houses and cafes and a number of shops cut into the rock. One shop made a real feature of the cave, and others, as you looked into them, showed the evident cuts into the rock on the back walls.

Onwards, we detoured to Zahara – another unknown surprise. We had seen the castle sitting on the rocky outcrop as we drove on the other side of the lake, and getting more glimpses of this feature as we drove towards it delighted us. Parking our car, we started the climb through the town, then up to the castle, and then up the castle itself. The views over the town and the valley below were well worth the effort.

Zahara from the distance 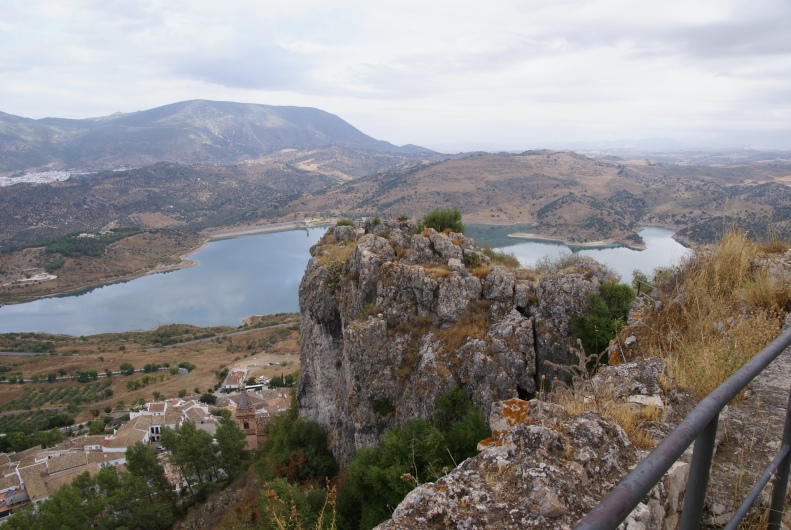 Views from the castle 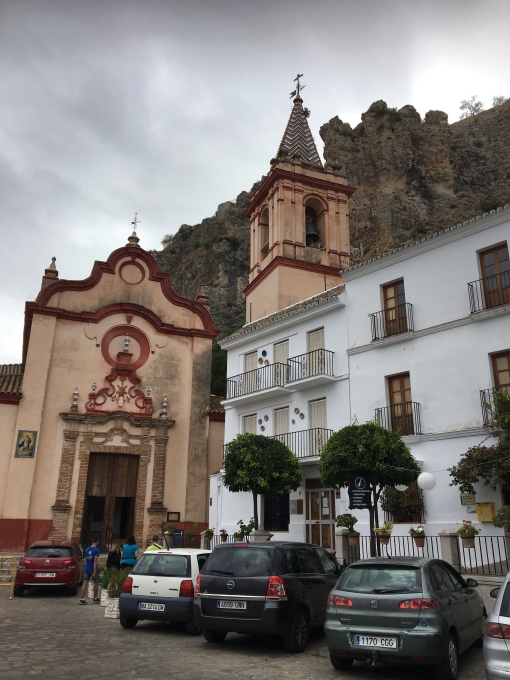 Zahara, with the castle behind 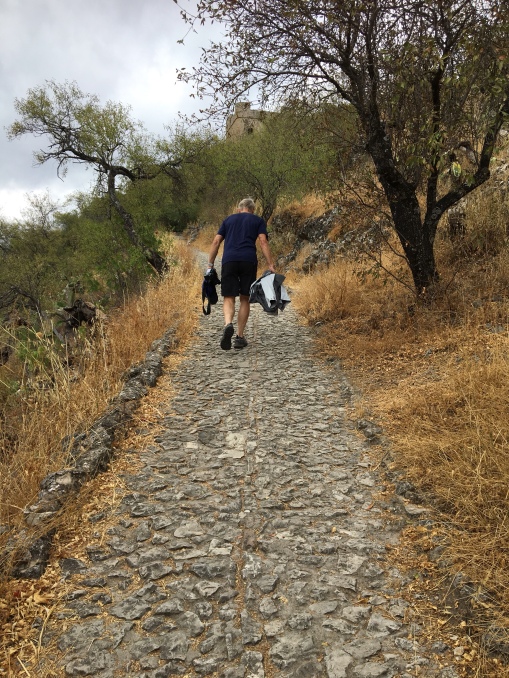 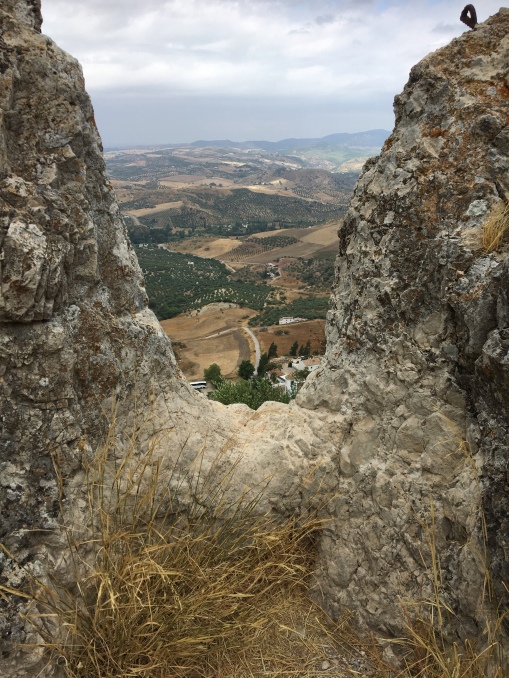 From the top of the castle

New neighbours 😍
Leaving home for a short break. What a beautiful view 😍