We had attempted to see the north of Spain once before but had to change plans with an opportunity for a housesit presenting itself, but now we had an extra ten days from our return to Madrid, so planned to explore places we couldn’t find housesits. We picked up our very cheap car rental (costing us €4.80 per day but an extra €6 per day for an additional driver!) from the airport and headed west.

Stopping for a break, we started spotting the pilgrims walking the Camino de Santiago often in twos and threes, all ages, sporting the mandatory backpack and walking staff. We could tell those who had arranged for luggage transfers as they only carried light day packs, and there are bus stops for those who need a boost further along the way. There was a never-ending procession of pilgrims through some of the little towns and, out in the countryside, we spied them on the tracks through the trees away from the road.

Lovely Hostel in a beautiful setting

Our first night in a lovely little village right on the Camino  (Molinaseca, chosen as an almost halfway point to Santiago de Compostela) was a delight. The Way Hotel catered well to the pilgrims, providing comfortable beds and a kitchen/dining room for their use. The town had a few restaurants but was quiet as the summer holidays had finished, the pilgrims starting to thin out. Chris enjoyed riding from here but, out of the town, he headed up a quite steep hill for 10km not even reaching the top, turned around and headed back down…passing a number of walkers who had obviously climbed up the other side of the mountain!

Next day we drove towards Santiago de Compostela, leaving our village with many pilgrims – they probably had 3-4 days walk ahead of them. Constantly we caught sight of many many groups and solo walkers. I was surprised how many there were, having heard of the Camino, watched the movie, but was blown away by the distances and number and age of the walkers (many were older than us!)

Our B&B on the outskirts of Santiago was a lovingly restored family home, now offering large comfortable rooms, social spaces (outside and inside) and a kitchen we were allowed to use if desired, only a 20-minute walk to the centre of town. 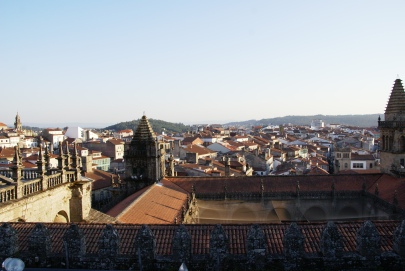 Views from the Cathedral rooftop

Santiago de Compostela itself was divided between the old town, with its lovely cathedral and huge square where the pilgrims gathered and caught their breath, celebrating with others finishing their trek, and newer blocks that seemed to have no connection to the old city. One evening I booked to climb to the rooftop of the Cathedral to enjoy views over the city, and get a different glimpse of the inside of this huge place.

Pilgrims on the final few steps 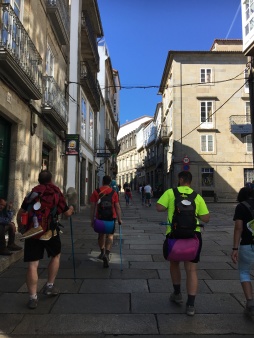 With trusty staff and scallop shells 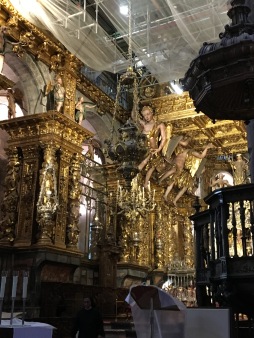 We spent two days here exploring the old town, finding some reasonable coffee, soaking in the sights and driving out to the Atlantic coast as well.

Leaving town on a misty and grey day, we drove northwards to the Bay of Biscay and along the coastline to Salinas, our stopping point. There was little to do in this tiny town, apparently a buzzing surfing paradise in the summer, but very grey and quiet this day. We did wander out to see the Philippe Cousteau Anchor museum and rocky viewpoint over the bay.  Our accommodation was spacious, but unfortunately, I had not read the description properly – it was a surf school and we were probably the wrong demographic to stay here if we wanted an early night… We enjoyed the view of the sea, Chris managed a bike ride on relatively flat roads, the bed was comfortable even if our neighbours woke us arriving home at 4.30am – it was an experience but we were pleased for only one night. Our penultimate destination was Donostia/San Sebastian, almost at the French border, that we had heard so many good things about. Chris had been speaking to a client via email and happened to casually mention that was where we were headed and was told we needed to stop in Bilbao, on our way, to visit the Guggenheim museum… so of course we did! This was a surprise to us, as it hadn’t appeared on our radar, but was definitely worth the visit. (I read ⇒here about the amazing effect this place has had on the town of Bilbao). The gallery was full of beautiful exhibitions that we couldn’t photograph, but we definitely got our culture fix for the month here with an exhibition of everyday items (pots and pans, shoes, telephones etc; see it⇒ here) turned into sculptures and a very interesting Picasso exhibition. 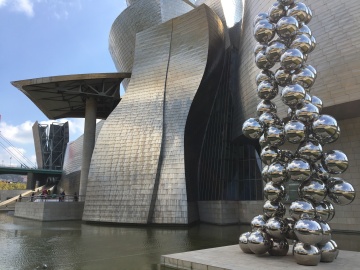 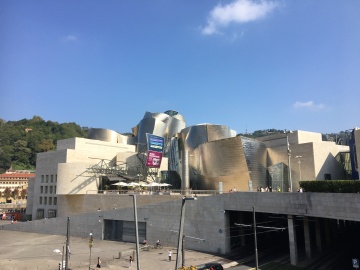 Huge Sculpture outside the museum

Finally, we got to see the beautiful half moon bay of sheltered sand that makes up La Concha beach in San Sebastian, which has been a favourite for Spanish and international tourists since at least 1885, when Maria Cristina, the widow of the Spanish King Alfonso spent a summer here and decided to return annually.  We discovered that Donostia is the Basque name for this town, and most signs were in Basque and Spanish.

We had fantastic weather to explore on our first day, climbing to the top of Monte Urgull with lovely views over the city, beaches and to the hills beyond. Then the old town with its narrow streets, filled with shops and tapas bars. 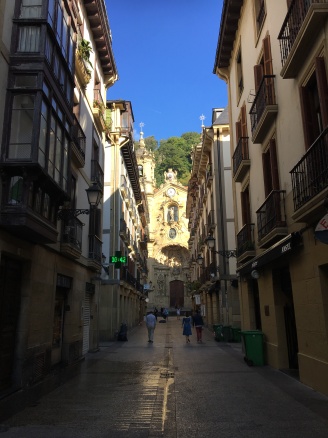 The previous night, the old town was full of busyness, thousands of people spilling out of the numerous bars and restaurants. It became hard to find somewhere for dinner but eventually, we found a space to enjoy a shared meal of raciones (larger plates than tapas, but smaller than mains). Our explorations led us to a lovely coffee shop that gave us a great fix that day… and the day after! Even here, on almost the French border, pilgrims were setting off on their trek across Spain towards Santiago. We were surprised at how many different places on this trip we saw the Camino symbols and pilgrims heading westward.

Almost reaching Madrid, we stopped off at Segovia, another place recommended to us … and what a lovely surprise! The Roman Aqueduct from the 2nd century AD was mindblowing in sheer scale! And so well preserved too.

some of the 167 arches in the city

Beyond that, the old town was pleasant to wander through, revealing the usual suspects of cafes, shops and cathedrals until we reached the Alcazar (castle) at the other end of town, built between 1155 and 1587 (and then restored in the late 1800’s after a fire). It was one of the most beautiful castles I’ve seen (next to the Bavarian Neuschwanstein) and reminded me of the Disneyland castle but so much better! We enjoyed the views beyond the Alcazar over the countryside, as Chris planned out his cycle route that day. 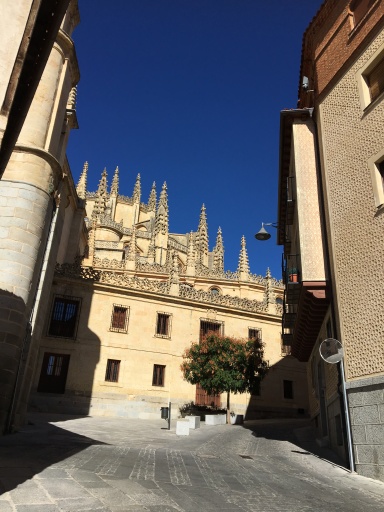 So beautiful! Lovely decorations on the stone surface too

We enjoyed this circuit of the north of Spain with the pilgrims, cathedrals, beaches, mountains and surprising finds, but now we were heading south to familiar territory to care for more canine and feline friends.

2 thoughts on “Pilgrims, Picasso and Palaces”

Follow Kiwis on Adventure on WordPress.com
Join 160 other followers

Join 160 other followers
Loving the Fifty Something