Since our first European housesit in April, we’ve cared for over 30 dogs and cats (plus a few fish and chickens too). Each animal had its own personality and we’ve liked different things about each of them. Even the pets that were hard to love at first grew on you and you end up missing certain things they do. I always thought of myself as a cat person, but after this year I realise that dogs have had a special place far more than the cats we have cared for. Probably because so many of the dogs have been rescue dogs and showed love and affection far more than the cats ever did.

France – Opio: Rocky and Deefer – we cared for this lovely pair twice, having been invited back for a second visit in July as well as our first experience in April. Rocky was a talkative beagle, very keen on letting us know when dinner was, and Deefer an aged brindle boxer – so gentle and polite. 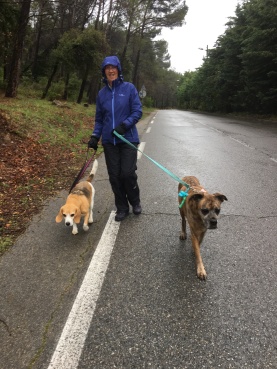 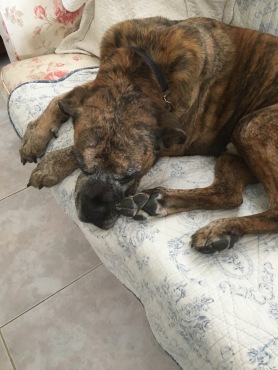 Spain – Taberno: Sam, Schoshie and Emmy – three very very different dogs. Emmy was the spoilt baby, allowed in the house and boss of the other two. Sam a four-year-old mastin was a slow and gentle giant. And Schoshie was the hunter, ranging far and wide on our walks in the countryside, getting into a bit of strife trying to chase rabbits over a cliff… Ludi the cat appeared at mealtimes, letting us know how hungry she was, but we hardly ever saw her in between.

Sad faced Shoshie with his collar 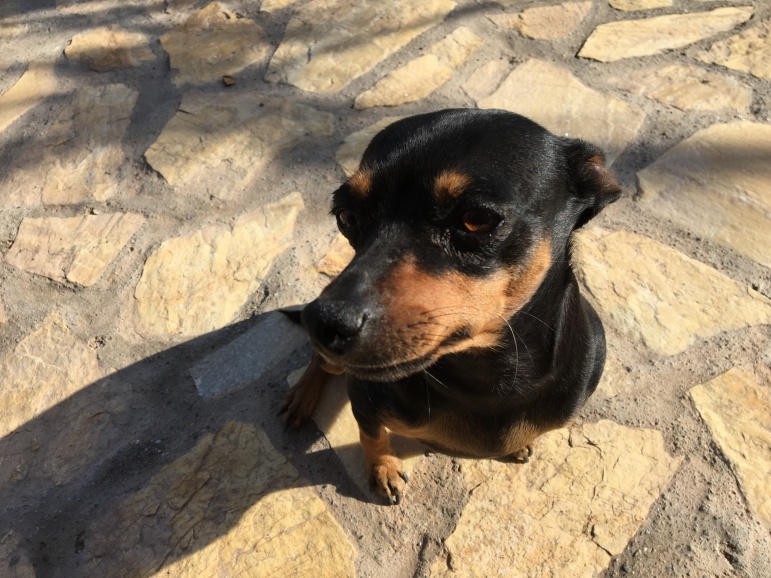 Calpe: Attie and Dave – two rat-bag dogs who craved walks over food or anything else. These two were hard work at first; walks were a battle to keep Attie close without my arms being ripped out as she pulled along so much,  but as the weeks went on their personalities grew on me and eventually it was sad to say goodbye. Dave knew how to wrap you round his paw… he just looked so cute, but the two of them had pretty serious playfights that often led to them being banished from the house so we could eat our meals in peace.

Dave (with the ears!)

Vera: We had our share of elderly dogs and our next charge, Charlie, was definitely an old girl. So many of our charges this year have been rescued from sad situations and our homeowners told us how Charlie was such a tiny bundle of knotted hair when they were presented with her off the street. She certainly struck gold with her new home, being a pampered pet and having two willing slaves to provide a loving environment she has grown old in. Our daily walks were a very short wander around the block so she could sniff at the latest offerings and do her (small) jobs on the way. There was also a cat but Smudge kept out of our way – generally we only saw her when she slunk downstairs to use the freshly cleaned litter tray. 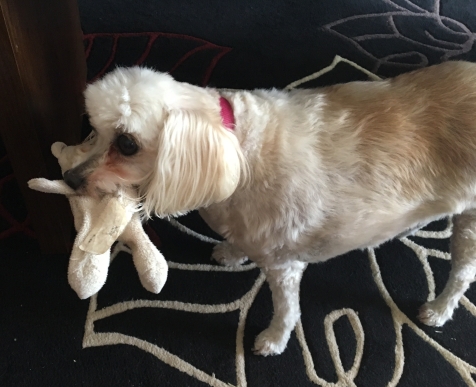 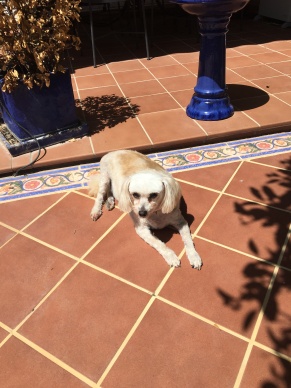 Javea: We only had a few cat sits, mostly we were caring for dogs, with a cat to be fed but Ollie made sure we knew that he was boss. This gentle ginger tomcat found at Oliva beach (hence the name Ollie) was so affectionate. He liked nothing better than to rub  his face around your ears, purring madly – but then he had a nasty tendency to sneeze quite messily over you. He was a very laid back cat, just enjoying company and wanted to be with us wherever we were.

Ollie joining us for lunch 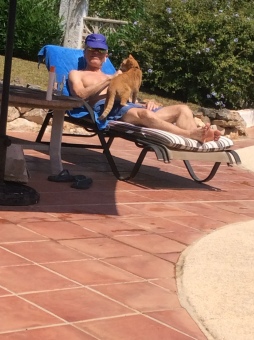 Pooltime with the cat 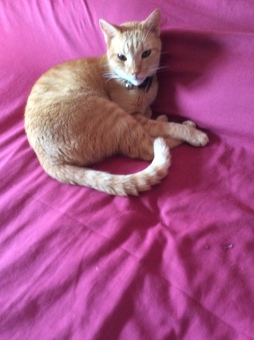 Alhaurin de la Torre: Our next assignment involved the most animals (15+) we ever cared for at once (and probably close to the total of all the others!) The dogs, Rika and Jarra, were lovely gentle girls who waddled around with us on our daily walks. Joining them were the cats: Dick, Lucy, Tom, Lucky, Jess, Skippy, Biff’s mum, and an unnamed ginger tomcat. And then there were the five rescue kittens downstairs – kept separated as they were young and a couple of them had daily medications – so there was a lot of feeding and cleaning of litter trays happening there. On top of that we topped up feeding stations for stray cats and dogs in the community 2-3 times a week. We knew it was going to be busy, and it kept us occupied when we weren’t enjoying the pool at this place.

relaxing with Rika and Jarra. Arcos de la Frontera: Isis the cat and two young kittens Romeo and Theo kept us entertained next. I enjoyed the morning walks looking over the neighbourhood with Isis and the kittens kept us amused with their antics as they developed more climbing skills and played hard, and slept hard too.

Sleeping on top of the fridge Alhaurin el Grande: Two dogs became three when we ended up caring for an additional friend rescued from the riverbank a few weeks prior to our arrival. Maggie and Canela were lovely older dogs with very gentle natures, and thankfully the new puppy Dora had been taken under Maggie’s wing for training about toileting and walks. She was a rambunctious delight and we have since discovered that she has been rehomed successfully to Belgium. The cats here, Rory and Flora tolerated us but ensured we knew when mealtimes were close. Sotogrande: Gentle giant Toots and her delightful older friend Tiger Lily were wonderful to care for. We loved them both but Tiger just had to look at me and I would melt. Toots enjoyed a cuddle but as soon as she was getting attention, Tiger had to push in and demand her share too. We enjoyed lovely walks in the countryside with these two. We were lucky enough to have two separate housesits caring for these gorgeous girls and their feline friends Gussie, Gertie and Tuppy. Orce: From looking after these lively characters we moved to care for Lucy, another delightful old girl living in a cave house in the “middle of nowhere”. She loved to relax inside and looked very unsteady on her feet as she got out of her basket but, on our walks, she gamboled like a lamb, prancing around and thoroughly enjoying being out with us. She was very good at waiting to get her winter coat on but was impatient with us when we tried to get our shoes on. She was a lovely dog and again shows how loving the rescue dogs become. Her feline “siblings”, Whisky, Trixie and their mum Smudge, were a bit shy and didn’t interact with us much other than Whisky telling us how hungry he was on a morning and evening.

walking on top of caves 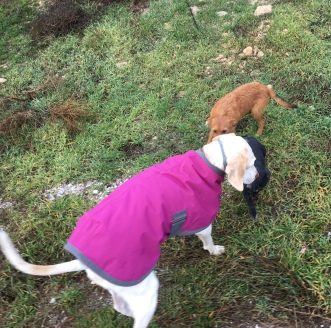 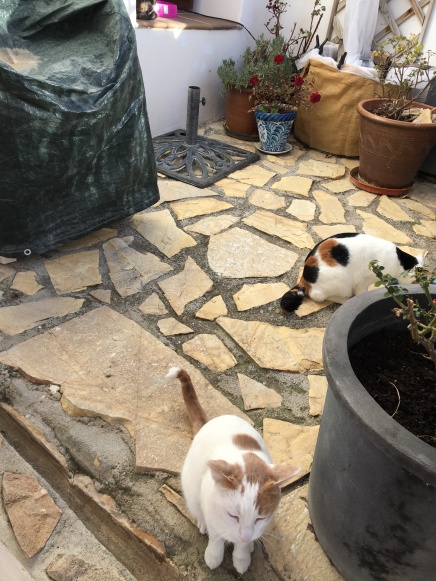 Freila: Next was another feline adventure, with seven cats to care for, including Smartie who needed twice daily insulin injections. She was well used to the procedure and it was an easy process to administer these injections. I was a bit unsure but, after being shown what to do and then observed doing it, found the knack wasn’t too hard. The other cats, all rescues, included Bentley, Max, Benjamin, Charlie, Pepper and Raya. Benjamin was a recent arrival and kept his distance, but Max and Bentley allowed a bit of attention and stroking, and once we started delivering soft food that was acceptable to Raya, she snuggled up to us as we sat watching TV on an evening.

Daily snooze with a view 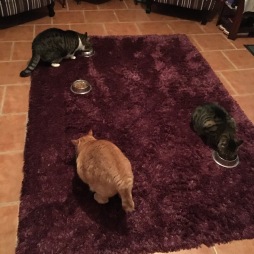 Turre: Back to dogs again, I have found them to be far more affectionate and responsive than most of the cats we have cared for. Dawa, Boris and Sonam were lovely friends over our next weeklong housesit, and tiny Tashie the rescued kitten eventually warmed up to us enough to snuggle under my chin on an evening. The dogs roamed free on the campo on our walks, sniffing out and sometimes getting lucky finding one of the numerous rabbits in the area. This led to much squealing of excitement from the dogs and a mad chase always won by the rabbit. We were told by the homeowners that sometimes the dogs roamed off and not to worry, they always came home. Of course we worried, and we returned from most of the walks with only one, maybe two dogs – the others skulking back in the gate later. I learnt to carry dog treats to entice them to stay close, but was not fully successful with this. Boris always greeted us on a morning wanting a hug and cuddle – he was the most affectionate of the three, but all were just lovely in nature. 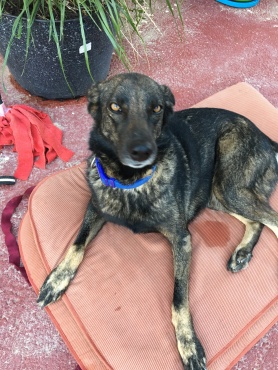 Finally, we are at our last housesit for the year (and our last one caring for pets in Europe), back in Taberno where we first started in Spain with Schoshie and Emmy, cat Ludi and two new arrivals, Pepe and Bruno. 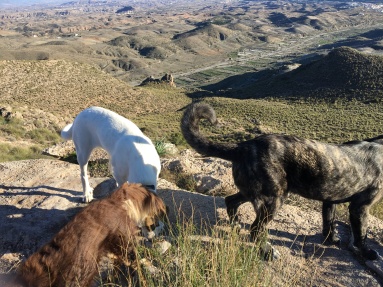 Of course, in life, death is inevitable and three of our lovely friends this year have gone:

Sam, we lost during our time with him – suddenly and unexpectedly.

Deefer was an elderly gentleman whose time came to be at peace and pain-free.

We look back with wonderful memories of all these special cats and dogs and are thankful for the opportunity to care for them. I’ve mentioned before that we have had the most success with Trusted Housesitters as a platform to view and apply for assignments worldwide, and I would definitely recommend them to others. You can get a discount code ⇒here!) Otherwise I’d recommend HouseSit Match for sits in Spain (they also have a number of sits in the UK and Australia – discount code →here )

We have one final housesit in January, but there are no pets, just a home to care and provide a presence for. We will feel somewhat strange without the company of pets, but at least we will be able to do our laundry and not immediately be covered with pet fur again.

Follow Kiwis on Adventure on WordPress.com
Join 159 other subscribers

Join 159 other subscribers
Loving the Fifty Something