A few years back, our plane approached Heathrow over the city of London (on a clear day!) and we got fantastic views of many landmarks. Now, at last, we were going to actually be able to visit some of those well-known places. As we only had three full days we compiled a list of “must sees” and planned our time to take advantage of the daylight. Being winter, the sun set just after 4pm, but it also meant that there were fewer tourist crowds about. On the train from Bath, I spotted discounts attached to our GWR train tickets. I went online and pre-ordered 2-for-1 vouchers for many of the sights we had earmarked. We were extremely thankful as it had us gasping that to get to the top of the Shard it should have set us back at least £64 so we saved £32 on that alone – more than the price of our train fare. I ended up with half price tickets for the Shard, the Tower of London, St Paul’s Cathedral and Westminster Abbey, saving us well over £120 if we made use of them all.

View across the Thames from our hotel

Arriving at Paddington we purchased our Oyster (transport) cards, hopped on the Circle Line to Blackfriars and, from there, a short walk over Blackfriars bridge to our hotel on the Southbank. Of course our rooms were not ready at 2.30pm, so it was time to grab a coffee from one of London’s numerous coffee bars and take a walk along the river to the Shard. We decided to do this first so we could see the city by day, watch the sun set and then see London light up. It was a fast elevator ride to the 68th floor and then a few steps up to the 69th floor viewing platform. Mostly enclosed by glass, it is still partly open-air and we were thankful for our winter jackets, gloves and hats as we took in the view. Of course, there were the Instagram ready girls, dressed in their floaty summer dresses and heels, slowly turning blue as they posed and pouted. The views across London were pretty good and we spotted several planes coming in on the circuit we had done all those years ago. Surprisingly, the clouds had parted and the sun was actually visible for the sunset. 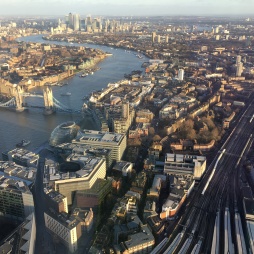 We loved the location of our hotel, the Mondrian (now called Sea Containers), as it was easy walking to many cafes, bridges and sights. The river walk took us towards dinner, surprisingly finding Waterloo Station in the  process. Our room was extremely spacious but, of course being the budget option, no view of the river. We felt that Expedia definitely gave us an excellent deal on location and comfort.

Walking over this iconic bridge

The Tower of London

Wednesday dawned grey as expected and we started off on foot towards  the Tower of London. Walking over the magnificent Tower Bridge was a great start to our day, and once in the Tower of London, we joined the free tour led by an authentic Beefeater. It was very good, taking us a short distance physically but over hundreds of years historically. Being a Royal history addict, I knew of the unfortunate ends of two of Henry VIII’s wives in the Tower and having the locations and more details explained certainly brought it all to life for me. Seeing where Ann Boleyn was brought before her wedding, and then before her death by boat through Traitors gate made much more sense now. Then the Crown Jewels in all the magnificent splendour (no photos please) and the horse and knightly armour. We could have spent much longer exploring more of the grisly exhibits in the dungeons but decided to move on. 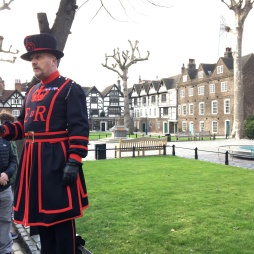 Our amusing but informative guide 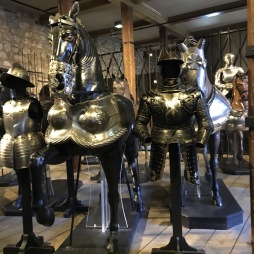 Armour for horse and man

From there we walked on toward the centre of town, to St Paul’s Cathedral. It’s fascinating noticing the differences between the Catholic cathedrals of Spain and the Anglican cathedrals of England. They are still marvels of architecture and dominate the landscapes, but inside I found the English churches much calmer, less busy with the decoration, gilt and gold. We opted to climb the 528 steps to the different levels of the dome and when we reached the first level, the Whispering Gallery, we were definitely aware of the unique acoustics as we could hear conversations from the other side of this interior level. As we climbed we were in the skin of the outer and inner dome between the Stone Gallery and the Golden Gallery, finally emerging to the outside for some wonderful views out over London. 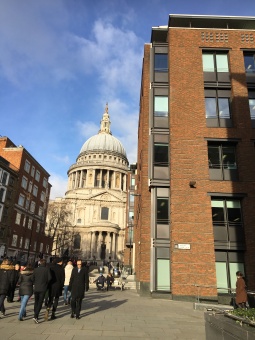 Glimpses of the Cathedral

Views from the top of St Paul’s

The Shard in the distance

We spent a lot of time walking on our first day and our fitness trackers informed us we had done 22,000 steps or 15km and climbed 48 floors (mostly in St Paul’s I suspect.) Our dogwalking feats had prepared us well for our sightseeing days. 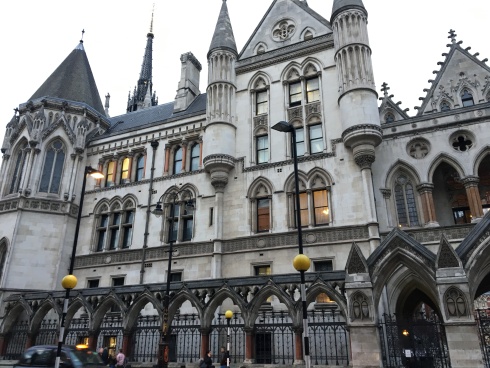 Next day, we caught a red double-decker bus towards Trafalgar Square, as this was the one memory Chris had of his childhood visit, all the pigeons around Nelson’s Column. Shock, horror – no pigeons at all! But again we realised the wisdom of visiting in winter as there were not a lot of tourists either. We strolled around the corner to set foot inside NZ House (very hard to find as there were no flags announcing its presence, compared to Canada House which had flags hanging off every wall) and then through Admiralty Arch and walk down the Mall towards Buckingham Palace. The Queen was in residence so no chance of any tours here, but we did wander the gift shop and came out with the obligatory bag of goodies.

Down the Mall towards Buckingham Palace

More walking now towards Harrods, through some very exclusive addresses – the names of the streets rung bells as we wandered onwards, distracted by spotting the Maclaren store where we had a wee drool. 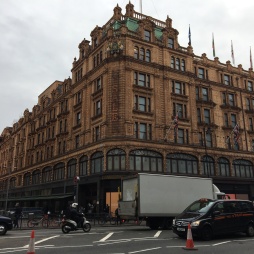 Harrods did not disappoint. Its frontage was eye-catching and, inside, we found the food hall and spent quite some time admiring the display of various food groups. They display everything incredibly well, and I’m disappointed I was so caught up with the delights on offer that I forgot to take any photos. We wondered about eating here, and caught the lift up to the top floor cafe, but the prices were beyond us. 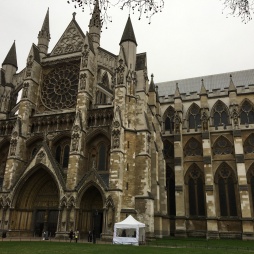 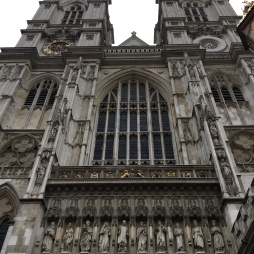 Just because we were in the area, we dropped into the V&A (Victoria and Albert) museum very briefly, but by now it was getting later and we couldn’t spend any length of time here. Instead, we walked on past Westminster Abbey (were coming back tonight) and the Houses of Parliament, catching a train back to Blackfriars to rest our weary legs (todays total, 17km). 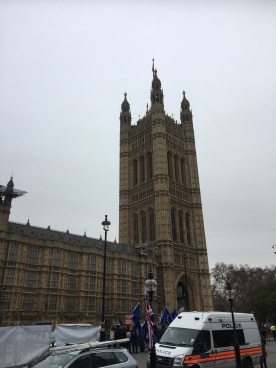 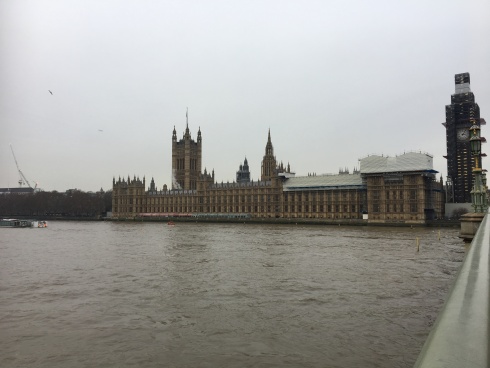 After a bit of rejuvenation, we caught the tube back to Westminster Abbey to attend Evensong. We enjoy seeing a church in use as it should be and there was already quite a crowd taking up some of the seats of the choir and towards the altar as we arrived. At least the heating was on and we weren’t frozen souls this time. It was interesting to see the layout of this place and think back to the recently televised Royal wedding and remember where everyone was seated. 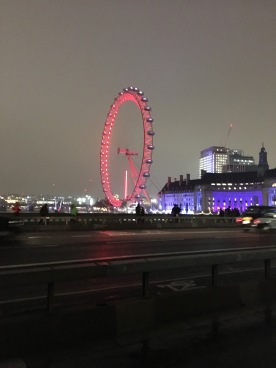 Walking out afterwards into the dark evening, we made our way back across the bridge and along the Southbank once again to find a pub dinner and a well deserved nights rest.

Our final day dawned with a watery sun and we rode the train towards Richmond, the idea being to see Kew Gardens and do a small bit of family research in the National Archives. Once arrived, we decided to skip the gardens and focus on the research as sadly we didn’t have a whole day to explore the extensive gardens. The small town of Kew was lovely to wander and we admired the houses, but felt sorry for the occupants who would have to endure constant noise of jets overhead on their final approach to Heathrow. Chris managed to view a pouch of information about his father from the archives that was unavailable online, so felt he had some success. 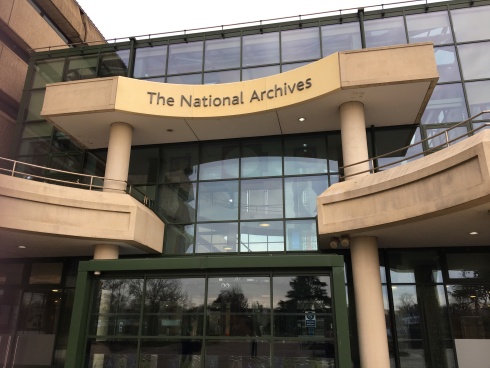 Back in London City, we found ourselves staring up at the “Gherkin” properly known as 30 St Mary’s Axe. This whole area is buzzing with new development pepperpotted amongst the old. Some of the streets are still very narrow but often open up to a commercial shopping street. We enjoyed wandering some of these “back streets” spying Pudding Lane and the monument to the Great Fire of 1666, as well as names familiar from the Monopoly board.

We ended up departing London via Fenchurch St Station on our way to Southend Airport, after our final night when we treated ourselved to a cocktail and snack on the rooftop bar of our hotel with beautiful views across the river. Sadly the price of this treat was more than we spent on dinner for both of us at a pub restaurant further along the river. We enjoyed our time exploring this famous city but were more than ready to return to the blue skies and budget friendly Spain.

Expensive but tasty farewell to London

Views across the Thames from the Bar

Beautiful evening full moon rising. Love where we live ❤️😍
My welcome committee at the end of the road. #ruralliving