Packing up and saying goodbye to our canine buddies and their mum brought another adventure into our lives. We had booked flights from Marseille to Alicante and had a few days in between to explore. Thanks to following the Instagram feed of another couple of kiwis (TravelKiwis), we had seen places we were interested to visit nearby so we set off (via Avignon to change our rental car) to Montpellier. 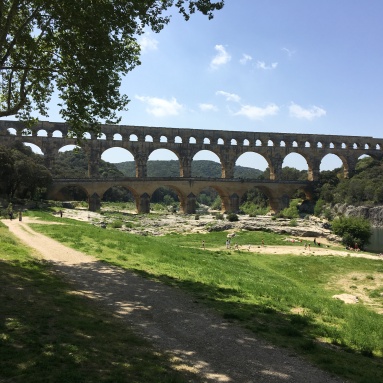 On our way, we stopped at the Pont du Gard, an amazing Roman aqueduct that has stood the test of time, and become a lovely recreation area. There were multitudes of groups walking the trails, swimming and floating in the river, picnicking and eating at the cafes within the surrounds. The area was very pretty and well set up for visitors, much more than I expected to see. We spent some time here wandering around and over the bridge, before purchasing a distinctly awful coffee and a much nicer gelato. 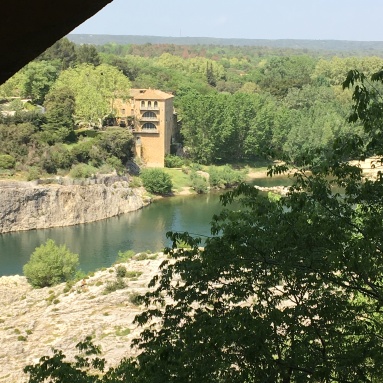 On our way again we made our way to Montpellier (via the Camargue), following Ms Google’s instructions,  to the centre of town (always a bit hairy!) and a parking building underneath the central square. It was a quick visit, as our travels had taken longer than expected, but we liked the look of the old buildings and almost Parisian feel of some of the architecture. We thought we should exit and find our way to our rural B&B in St Just, a tiny hamlet that offered a peaceful nights sleep at a very good price. The local village offered only one restaurant, and although we weren’t expecting much, we enjoyed a very pleasant meal. The outlook over rural fields from our room was very relaxing.

snack time in the sun

Next morning, replete after a nice breakfast, we headed south to Perpignan. We spent some time wandering the streets of Perpignan, enjoying the canal, the ancient buildings and then to the 13th-century citadel of the “King of Majorca” where we wandered and took in the views. The walls are clad in stones which were incredibly uniform in size and texture. From the tower, we had great vistas of the snow on the Pyrenees. 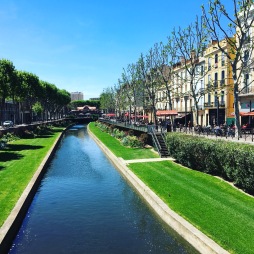 view of the Pyrenees

Twenty minutes south, we were in Collioure ( we had never heard of this until seeing Terry and Maura’s Instagram feed) and almost led astray by Ms Google again as we attempted to find our B&B. Thought we had missed the (non-existent) entrance and were about to U-turn when we realised that this WAS our gate and there was our parking area! Collioure is a fishing village with a unique character. Wandering along the waterfront we got lovely views across the harbour at more historic spots. The place was very busy with tourists, and this was the off-season; I hate to think how busy it would get in summer. The harbour was quite sheltered from the winds that were whipping along the coast, and we were blown about once we emerged from the shelter of the buildings.  We recommend a visit to this lovely town if you are ever near the Spanish border; there was a lot of Catalan influence in this place – street signs in French and Catalan, and menus distinctly Catalan too. 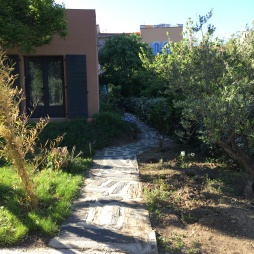 We were so close to Spain we could taste it, but it was time to head north again to a final stop before flying out of Marseille two days later. Thanks again to my Instagram friends, I had seen the most beautiful valley, not too much of a detour back towards Marseille, and not far from the Millau bridge … we had to visit. 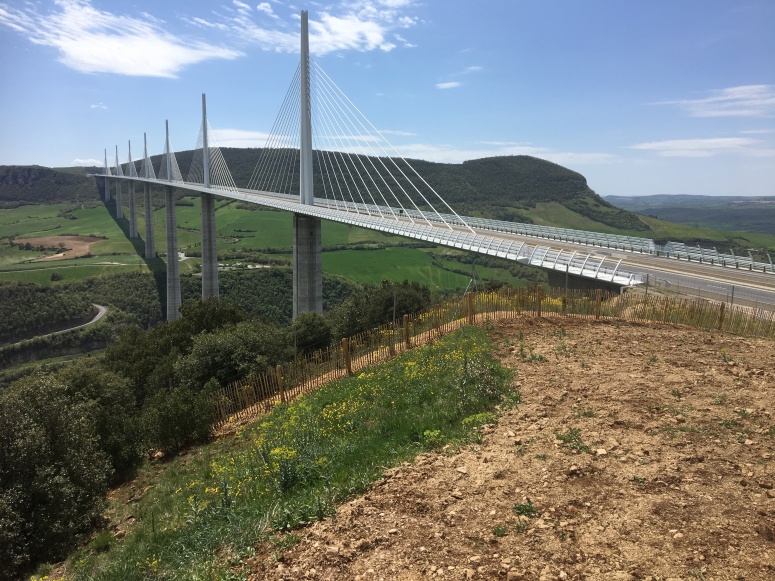 The roads were easy driving and we found the Millau viaduct – driving over this amazing feat of engineering and construction before arriving at a fantastic rest area and viewing spot of the viaduct. This area has been well set up with information areas, videos, models, cafe and local product information too. We had purchased a picnic lunch in Collioure and this was a perfect place to stop and enjoy a break and a beautiful sight. We spent some time here enjoying all this rest area offered us until Carolyn checked her email…

here we are then…

France is in the grip of strikes, and although we managed to get a train from Paris to Avignon; this time, no such luck – our flight from Marseille was cancelled due to air traffic controllers striking over the next two days. Panic! How do we get to Alicante in time? We had prebooked/paid our next rental car, had non-refundable accommodation, and we needed to be at our next house-sit by the 2 May – five days away. It took many attempts to contact the airline as suggested, but the earliest replacement flight was on the 5 May, so we needed to look for plan B or C… Flights out of other airports were horrendously expensive and what should be a 1½ hour direct flight stretched as far as 23 hours, due to stopovers and layovers in incredibly out of the way places. We phoned the rental car company to see if we could drive our car into Spain and drop off in Barcelona or Alicante but this would incur €600 additional cost. Trying to do this all via my smartphone became difficult so we decided to press on to our accommodation for the night and make our plans via laptop there.

(I’ve written way too much, so look for part two coming soon … especially the Russians!)

Solo dad and the chicks. Sadly mum passed away two days ago and dads got to care for the kids by himself now. Hoping he manages to grow them big enough to fend for themselves 😃
No filter needed. What a beautiful evening 😍