As we were sitting in the rest area under the Millau viaduct, Carolyn foolishly said to Chris, “Shall I drive the next part?”  So far Chris had done all the long-distance road trip driving and having to deal with double stresses of manual gear shifts on the wrong side, and Carolyn’s interpretations of the Google map instructions … he readily agreed to take the passenger/navigator role. We moved on towards Cirque de Navacelles, our stop for the night, in a beautiful valley carved by a river many hundreds of years ago. Our ride was careful but uneventful as we moved from highways to byways, and then to narrow steep winding roads descending and ascending valleys and hills and gorges. We stopped at the “Belvederes des Blandas” for our first view of the valley below from the northern edge. From here the road narrowed again, stone walls marking the edges as we switchbacked steeply down into the valley.  We were very thankful it was a quiet route and we didn’t meet any traffic coming up towards us. Our accommodation for the night was comfortable and, not being peak season, quiet. Our hostess hadn’t been to NZ but had worked with kiwi celebrity chef Peter Gordon in one of his London restaurants in a past life. We had arranged to have dinner here as there were no other options; at our dinner table were two Frenchmen, taking a weekend away from wives and family to walk the trails of the valley, and a Swiss woman, also enjoying the hiking of the area. 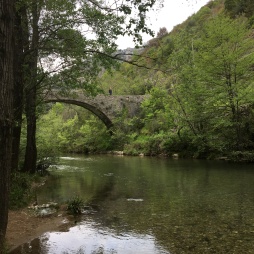 Dinner was not quite at the level I had anticipated (knowing the culinary experience of our hostess) but chilli con carne was adequate and filling. Breakfast, however, was very disappointing – apparently, we got a typical French breakfast (not a tourist one) consisting of bread and jam and cake. No cheese, no cereal, no fruit, but then yoghurt was reluctantly offered when requested, and that was it. Poor Chris was most unimpressed as he doesn’t do sugar, so dry bread and walnuts was his lot that morning. He took the yoghurt up to our room to have with our own cereal we carried for emergencies such as this.

Northern view of the valley

The night before, I had managed to log into the internet and re-arrange travel plans. The best option was to catch a train from Montpellier to Barcelona, overnight in Barcelona and then another train to Alicante. It meant that we lost a night near Alicante, and had to get a night’s accommodation near the train station in Barcelona. It cost us more than double our flight refund, but at least we would be in Spain, and closer to our final destination, albeit a day later. We would not make it to Marseille to explore this time but would have another day in Montpellier to fill as our train left later in the evening.

In the morning we wandered around the village and took in the tranquillity of the valley, watching hikers set off for their day out, before heading off ourselves, south to Montpellier again. On the way out, we had the best view of the valley from the opposite side. If you look carefully you can see the road in winding down the hill to the left of the photo. Back in Montpellier again, we first parked at the railway station and checked that we were ok to return the rental car there rather than Marseille. All confirmed, we wandered back into the centre of town to explore some more. This time we found an excellent coffee shop, the Coffee Club – coffee as it should be and definitely recommended if you need your antipodean style caffeine fix in this city. 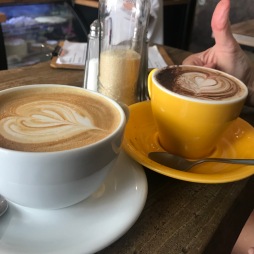 even their own Arc de Triomphe

We wandered the streets and out to a park overlooking the urban area beyond. We have loved these green spaces in France, filled with people. We strolled the streets for most of the afternoon before returning to our car and unloading everything for the evening train trip to Spain.

The train journey was uneventful and we arrived at our hotel in Barcelona in time for a gym workout and a free drink on the pool terrace overlooking the city night lights. By now, Chris was missing cycling every day and was seriously looking at purchasing a second-hand road bike for our time in Spain; but in the meantime, a gym workout and pounding the streets, picking up his running mojo again, had to suffice.

Next morning we wandered past a bakery to pick up food for the 4½ hour train journey south to Alicante before boarding our train. Because we booked so late, we ended up with front seats that are face to face with the passengers opposite us, rather than a single row. And then our seatmates arrived – 3 Russians… a guy and his two female companions (probably late 30’s, early 40’s) and before we had even left Barcelona, they disappeared into the next door restaurant car and returned with a number of bottles of red wine (think small airline bottles of the past) which disappeared quickly and were replaced just as quickly. They were loud conversationalists to start with and the volume and laughter increased throughout the journey in sync with the downing of the red wine. Once past Valencia, I’m not sure if the wine in the restaurant car ran out, or if the liquor license changed, but there were some sad faces until they realised they could mix miniature bottles of alcohol with fruit juice. Volumes increased again – they were jovial and friendly with it, but soon came the sound of snoring… until the rubbish cart rattled past and then the conversations started again. By this time, they had transferred across the aisle to spare seats so we had some respite.

As we travelled, the views out of the windows amazed us. In a world trying to reduce the use of plastic, here it was everywhere, being used for horticulture in many ways, from the hundreds of thousands of metres of plastic protecting young crops to larger tunnel houses. The hills were white with plastic! Finally, we arrived in Alicante and onto our next adventure… we are now in Spain!

3 thoughts on “Of Road trips and Russians (part 2)”

Sunrise views from the breakfast table 😍
Beautiful (but windy) evening watching the sun set from the blowhole deck. Another lovely day in paradise. 🤩🏝