What should we do with 10 days between sits in the middle of winter? We’ve seen almost all of Spain so we decided to hop over to see the “motherland”. I have never been to London (or much of England at all) and Chris was aged 3 when he visited London, so we researched our options to get a super deal (using Expedia) for flights and central London accommodation, plus a break to Bath start our week.

The plain in Spain 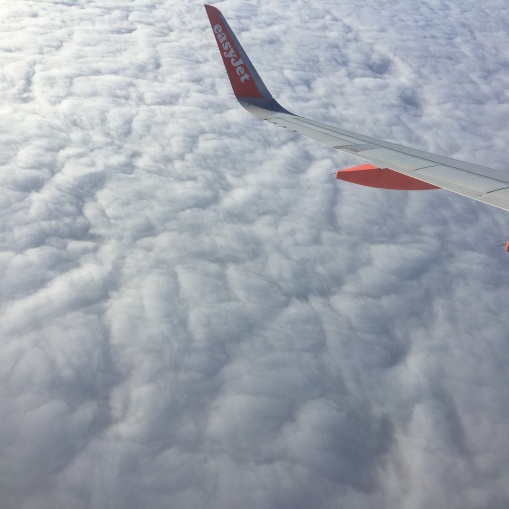 England is down there, we think We departed Alicante on time and in brilliant sunshine (but only about 10°) and landed in Luton with grey skies and only 8° almost three hours later. We managed our transfer to the bus to Paddington station, and then just made our train west in the nick of time. The train journey was uneventful, passing through towns and villages and green countryside along the way. It was so green compared to Spain! Coming out of the train station in Bath was strange with all these English speakers around, after so many months of not understanding the locals. First stop had to be a decent coffee and a snack, and we definitely enjoyed a “real” coffee. Our B&B was a 20 minute walk up the hill, and with carry on bags it was an easy trek but by the time we arrived just after 4pm the sun had set, there were no views of anything and the temperature dropped further. We were thankful for our down puffer jackets, gloves and hats. At least we could wander back to the town for dinner at a reasonable time, not having to keep Spanish hours any more, but what a shock to see the prices of food and wine. A small glass of wine averaged between £6-8 (not bad compared to NZ menus, but shocking compared to Spain!)  – and they were pretty stingy with the alcohol in G&T’s as well, so we “Scrooges” decided to stick to water. 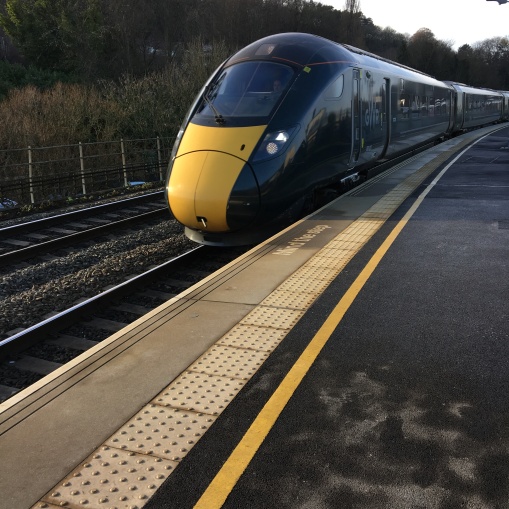 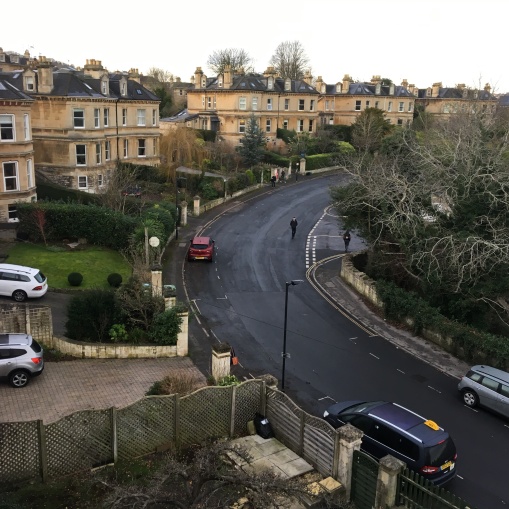 Bath streets around our B&B 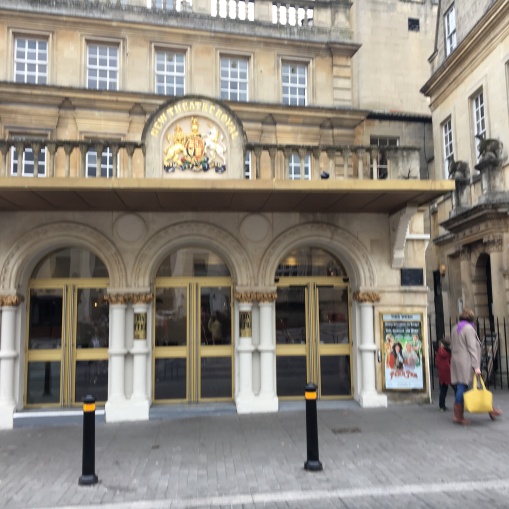 The next morning dawned grey again but, after a good breakfast, we strode on down the hill to take in the sights of Bath. We participated in a free walking tour of Bath that was very informative about the history of the early city since pre-Roman times up to the present day.  We learnt about the discovery of the healing springs, then the use of the area by the Romans, and the later development to this city in the 17th Century. Bath Abbey dominates the centre and has a fascinating historical timeline. Further out we viewed the “Royal Crescent” and the “Circus” – iconic architecture that has been preserved and valued. The Roman Baths have been excavated and restored (in part) to give an insight into the advanced way of life they had in the first century. 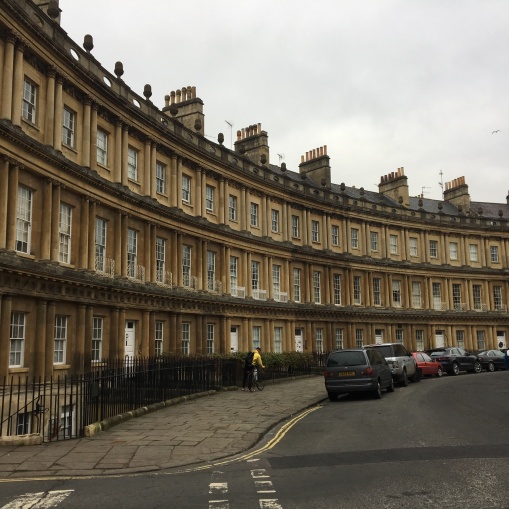 Quarter of “The Circus” 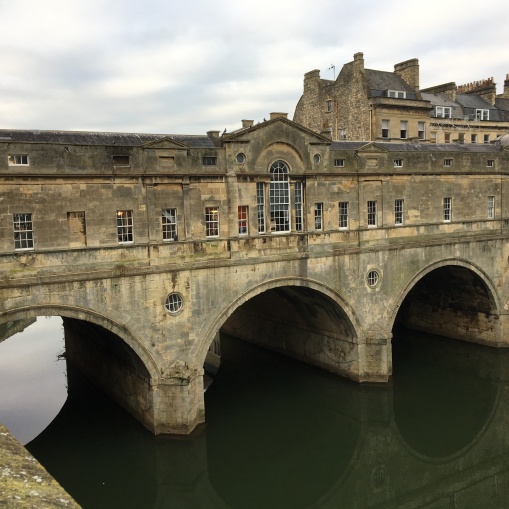 Pultenay Bridge with shops across the water 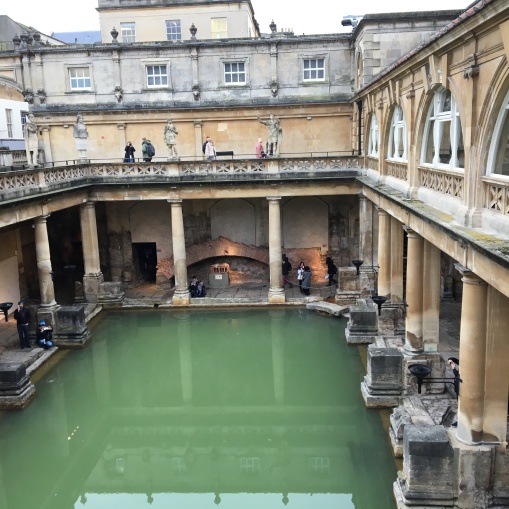 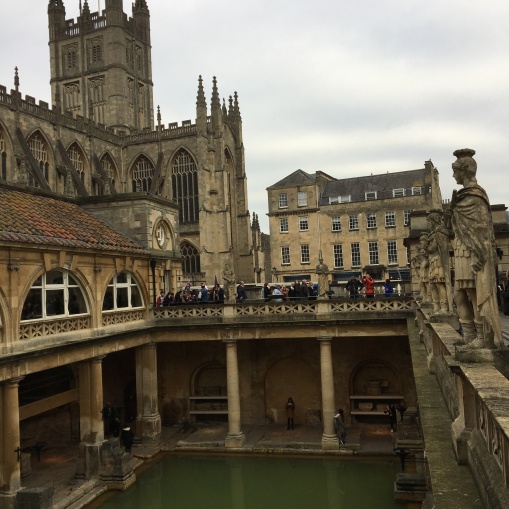 The Abbey and the Baths 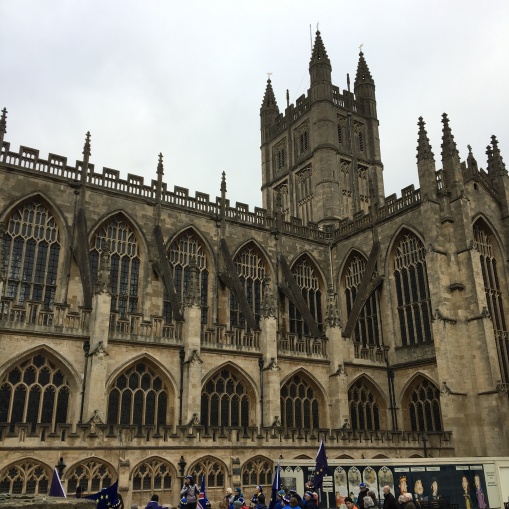 That evening, being a Sunday, we went to a church service in Bath Abbey. It was nice to visit a church during the service rather than doing the tourist gawking we’ve usually done. It was a small service, as during the day they had their Epiphany celebrations, and it was incredibly cold inside this vast space. The music and the message was good and we wandered off afterwards to find dinner and warm up. 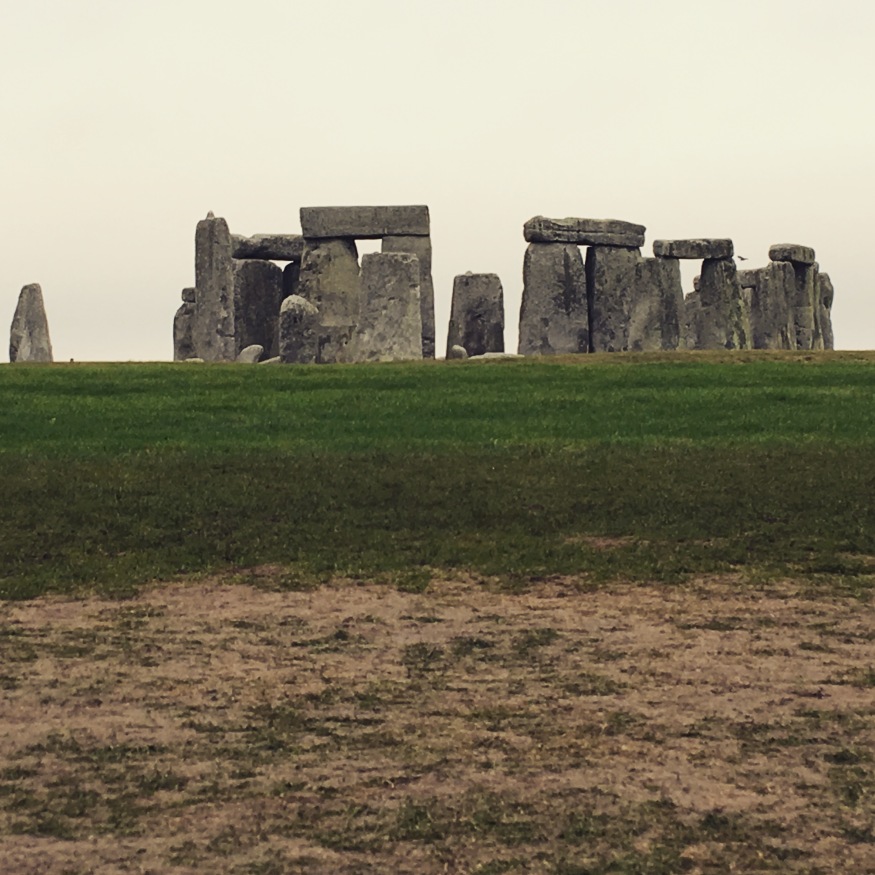 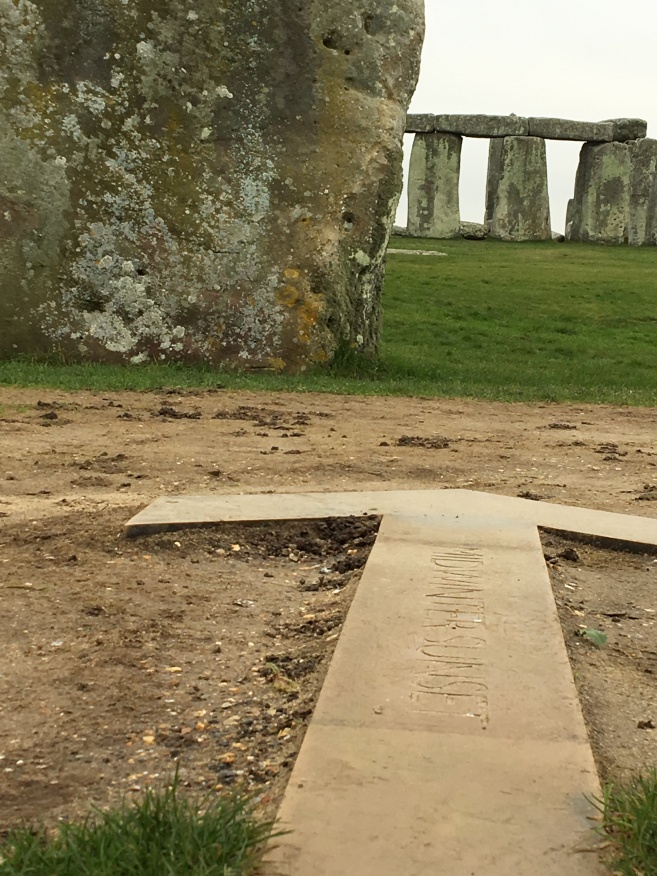 Pointing to the sunset

Being so close, we could not turn down the opportunity to visit Stonehenge, and hired a car for the day to drive out to this site. The country roads were very narrow and the verges seemed to lean in on you too, but being back driving on the left was easily adjusted to. At Stonehenge, you park in a huge lot and are taken by shuttle bus to the monoliths, with headsets that give you good information about the different aspects of the site. I was surprised to find they weren’t as big as I had imagined, but these stones are pretty huge and the feat of getting them here and erecting them is pretty amazing to think about. You can’t walk amongst the stones anymore, you view them from a distance, but get a good idea of the site. Inside the Visitors’ Centre, staff are on hand to give information as needed and there are some good audio-visual displays and artifacts on show. From Stonehenge it was a short drive to Salisbury, where the cathedral holds an original copy of the Magna Carta (but two weeks earlier, a vandal had smashed the display case so we were unable to see the original after all) and had some interesting history and magnificent buildings to explore. Salisbury itself was a quaint town with some very old buildings. 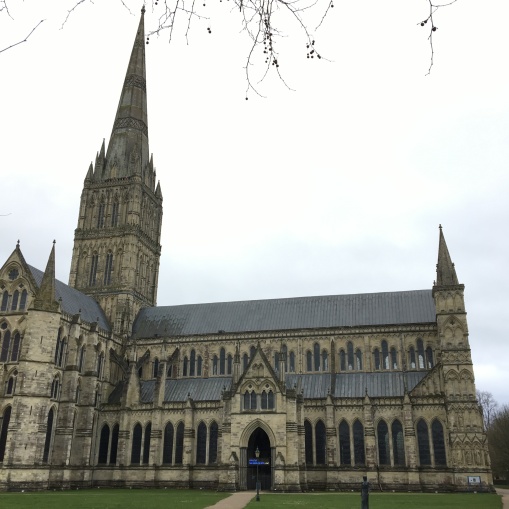 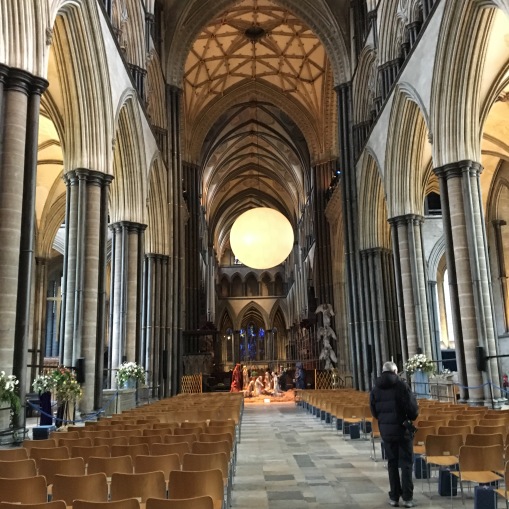 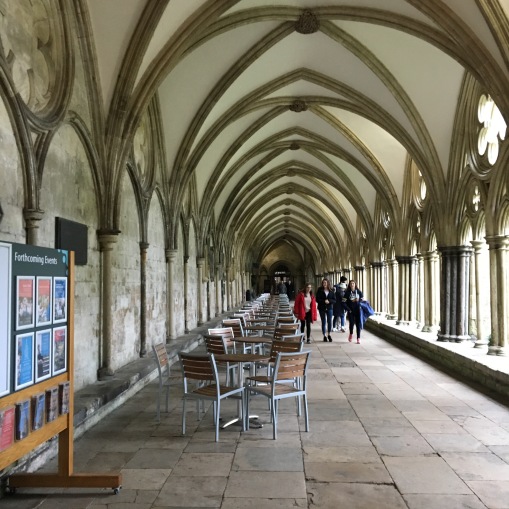 Copy of the Magna Carta 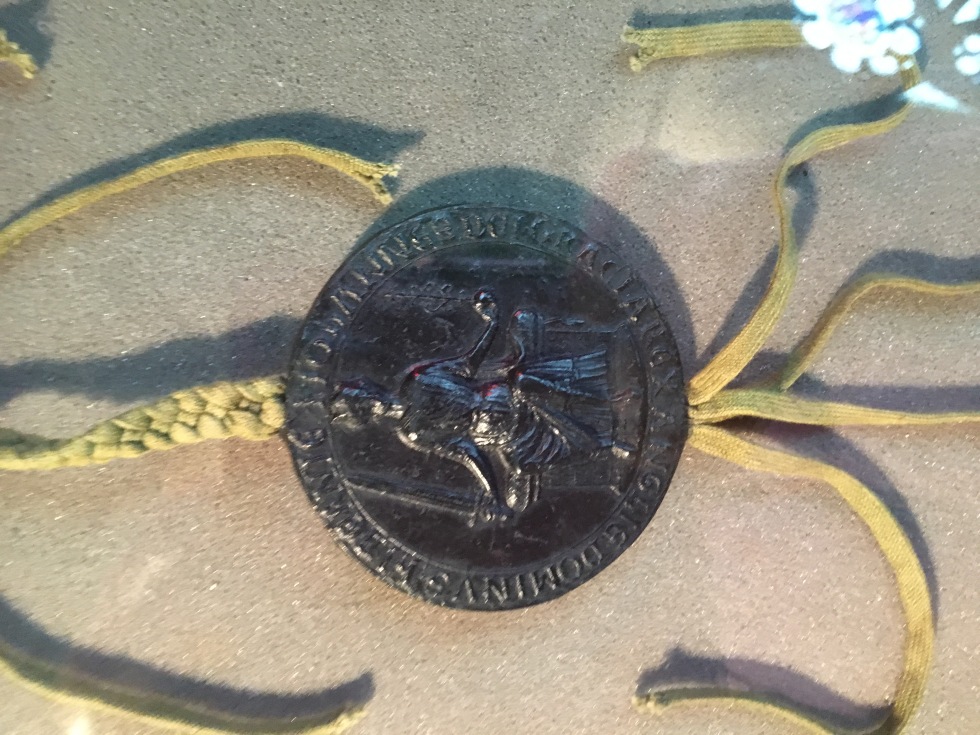 Not far from Salisbury, we discovered another historical site – the Westbuty White Horse, which we discovered has been updated to a concrete horse since the time it was first carved into the chalk hillside around 878 and updated in 1778. Somewhat disappointing up close, it is definitely best viewed from a distance. 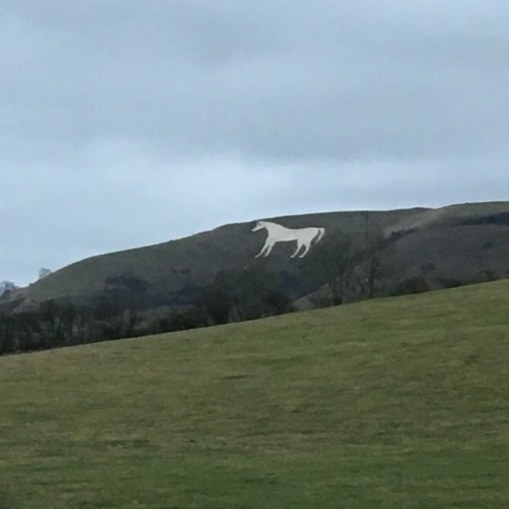 All too soon, we were walking back to the train station, this time bound for a stay in London…

One thought on “Off to jolly (c)old England”